Last year, when the Cambridge University Literary Society first asked her to come speak, as she wrote later,

quite completely upset at the very idea [she] quite promptly answered no. Immediately came a letter from Edith Sitwell saying that the no must be changed to yes. That it was of the first importance that Gertrude Stein should deliver this address and that moreover Oxford was waiting for the yes to be given to Cambridge to ask her to do the same at Oxford. There was very evidently nothing to do but to say yes and so Gertrude Stein said yes.’

Back in January, Gertrude had drafted the lecture in a few hours while waiting for the mechanics to fix her Ford, called “Godiva” because it had arrived naked. Then she’d read the lecture to her partner, Alice B. Toklas, 49, and to friends. And had them read it back to her.

Gertrude and Alice planned only a short trip to England from their home in Paris, but they did enjoy the dinner party that Sitwell, 38, gave last week in their honor. They’d met writer Virginia Woolf, 44, and were hopeful that she would agree to publish the lecture through the Hogarth Press that she ran with her husband, Leonard, 45.

Despite her initial apprehension, Gertrude is a big hit. Alice remembers later,

One of the men was so moved that he confided to me as we went out that the lecture had been his greatest experience since he had read Kant’s Critique of Pure Reason.’

Composition as Explanation by Gertrude Stein, published by the Hogarth Press, 1927

…Maxwell Evarts Perkins was born. Descendant of two signers of the Declaration of Independence, he was always described as more New England Yankee than New Yorker.

After graduating from Harvard with a degree in Economics, Perkins worked for a bit as a reporter at the New York Times, then joined the well-respected publisher Charles Scribner’s Sons in 1910 in the advertising department.

Within a few years he was moved to the editorial side, and began his long tenure as a legendary spotter of talent. Because of Perkins, Scribner’s published those Paris ‘such friends’ F. Scott Fitzgerald, and Ernest Hemingway, as well as Thomas Wolfe and other distinguished novelists from the beginnings of their careers.

What can we learn today from the way Perkins worked with these outstandingly creative people? That’s the question I asked when working on my MBA thesis at Duquesne University. The result is Manager as Muse: Maxwell Perkins’ Work with F. Scott Fitzgerald, Ernest Hemingway and Thomas Wolfe, which I have recently slimmed down and published on Amazon, in both print and Kindle versions.

What a perfect way to celebrate Max’s birthday! I’ll even be happy to sign a print copy the next time I see you…

…the door bell is ringing.

Writer Sherwood Anderson, 44, and his wife, sculptor Tennessee Anderson, 47, have come with his letter of introduction to meet writer Gertrude Stein, 47, whose work he has admired.

Stein herself opens the door. Only because her partner, fellow San Franciscan, Alice B. Toklas, 44, is away on

some domestic complication in all probability,

as she remembers later.

Anderson is already well known in the States for his novel Winesburg, Ohio, and he has read the few pieces of Stein’s works which have been published in “the little mags.”

His introductory letter, from their fellow American, Sylvia Beach, 34, owner of the Shakespeare & Company bookshop on nearby rue de l’Odeon, says in part, that Anderson

is so anxious to know you, for he says you have influenced him ever so much and that you stand as such a great master of words.”

Gertrude immediately invites him in.

…economist John Maynard Keynes, 31, newly appointed to the Treasury Department, is excited about his new job. Even if his friends aren’t.

Keynes is giving a party here tonight as a celebration of his new position, but his Bloomsbury pacifist friends don’t agree with him working for a government which has entered an impossible war.

Two of his former lovers, writer Lytton Strachey, 34, and artist Duncan Grant, about to turn 30, are conscientious objectors.

Keynes has decided to seat one of his Bloomsbury friends, painter Vanessa Bell, 35, between writer David ‘Bunny’ Garnett, 22, and Duncan. He thinks they’ll all get along.

After the party, they will all go back to Vanessa’s house, 46 Gordon Square in Bloomsbury, to continue celebrating and watch puppets created by Duncan act out a Racine play.

Painting of the Café Royal by William Orpen, 1912

…art critic Roger Fry, 43, is waiting for the train to London. The past few months have not gone well.

He’s had to leave a job that he initially loved—Curator of Paintings for the Metropolitan Museum of Art in New York City. Fry felt as though he had been turned into a personal buyer for the Met’s influential trustee, banker J P Morgan, 72, and they are not getting along. Fry had applied for a prestigious teaching position at Oxford, but didn’t get it.

In addition, the mental state of his wife of 13 years, Helen Coombe Fry, 45, has gotten consistently worse. Fry’s frequent travel for the Met job hasn’t helped, but now he is going to have to have her committed to an institution. His sister will help him take care of the children, but Fry knows it’s not going to be easy.

Across the platform, he sees a couple who look familiar. Of course! Painter Vanessa Bell, 30, and her husband, art critic Clive Bell, 28. Fry had met them at a party a few years ago in London. Maybe he should go over and chat. It would be good to have some new friends in London. 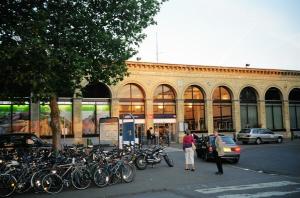 If you were able to watch the BBC Two drama Life in Squares about the Bloomsbury group, let us know what you think.
To walk with me and the ‘Such Friends’ through Bloomsbury, download the Virginia Woolf and the Bloomsbury Group audio walking tour from VoiceMap.