John Quinn was born in 1870, the first of eight children to Mary Quinlan, who had come to Ohio from Ireland as an orphan almost 20 years before, and James W. Quinn, whose family emigrated from County Limerick around the same time. Only five of the other children survived—a good percentage for those days—one younger boy, James, and four girls, Anne, Jessie, Clara and Julia. I haven’t been able to track down birth dates for any of them.

When my brother Patrick and I went searching for John Quinn in his hometown of Fostoria, Ohio, we naturally started with the graveyard, where we found a large Celtic cross and plain flat headstones for most of the family members.

Here’s me again with the Quinn cross: 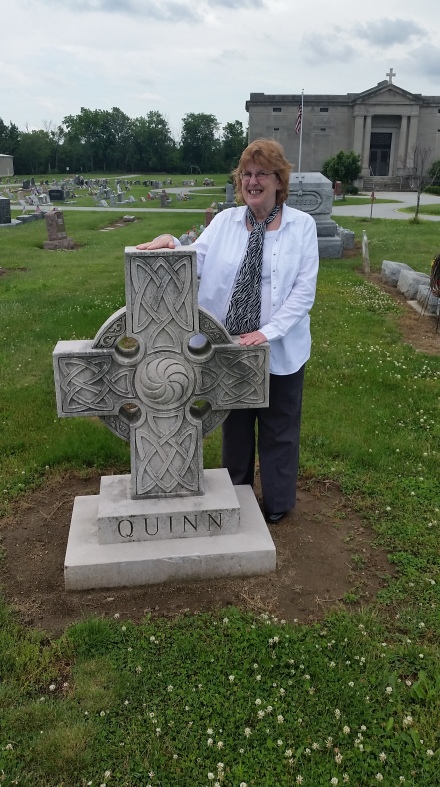 I was particularly interested in the Quinn plot because family deaths are what sparked John’s first trip to Ireland, leading to all of his other international adventures.

when Quinn would have been in his late twenties, a successful lawyer in New York City with law degrees from Georgetown and Harvard Universities. According to one report, he took his father’s death quite hard, perhaps because he spent most of his time in New York rather than with the family back in Fostoria.

Right after the turn of the century, his mother,

and one or two of his sisters,

died within either ‘days’ or ‘months’ of each other, depending on which source you believe.

Clara became an Ursuline nun, so might be buried with her order, and Julia married a local druggist, Will Anderson.

Have no idea what happened to his brother, James, but it sure looks as though he died:

One thing Patrick and I noticed was that John Quinn’s headstone had been there a lot longer than the others: 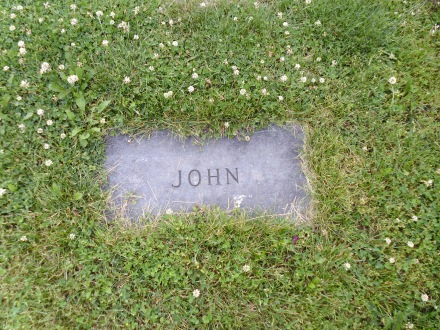 So he was probably first in and the others, whether deceased before or after him in 1924, were moved there later.

The deaths of the women in his family so close together is what motivated John to travel to Ireland for the first time, in the summer of 1902, when he met William Butler Yeats, then 37, Lady Augusta Gregory, 50, and other members of the Irish Literary Renaissance. This was the beginning of his life as a supporter of the arts and friend to the artists of his time.

After my Dad died in 1992, I too went to Ireland in the summer, 90 years later. It was my second trip, and I took part in an archaeological dig. ‘To find out if your roots are brown or red,’ as one friend told me.

On that trip I met Tony and the Dixons, the beginning of my life as an international traveller and Irish wife.

After visiting the graveyard, Patrick and I stopped in the Foster’s Museum on Main Street:

and picked up a DVD about Fostoria that I have yet to watch.

It was created by Leonard Skonecki, so my brilliant brother decided to Google ‘Fostoria Historical Society,’ and was able to leave a message that we were researching Quinn and wanted to talk to him.

After we had seen what we needed to in Fostoria, we headed down the road to Tiffin, Ohio, where the Quinn family lived when John was born. They moved soon after, but we figured we might find something.

Halfway there, Patrick’s in-car phone rang. It was Mr. Skonecki! He was very helpful and suggested that we forget Tiffin and high tail it over to the Fostoria library. He told us which librarians are in charge of the Quinn collection, and gave us his blessing to use his name. Thank you, Mr. Skonecki!

Patrick did a quick U-turn in the middle of OH State Route 18 East and back to Fostoria we went.

The Lovely Helpful Staff of the Fostoria library showed us binders filled with papers and clippings and letters and print outs of emails, all related to Quinn. And then pointed to the clock to emphasize that we only had about one hour to deal with it before they closed.

So Patrick and I spent an hour in a whirlwind of skimming, copying, collating, and stapling. I came home with a whole pile of stuff to go through at my leisure.

One of the most interesting finds was an article, ‘Quinn—Unsung Fostorian,’ in a publication dated July of 1972. With this picture. Seems as though something has happened to the Quinn Celtic cross since then:

Next time I’ll tell you what I found thanks to the Lovely Helpful Staff in the New York Public Library. And after that, about Quinn’s relationship with Charles Foster’s daughter Annie…

This year I’ll be piecing together my planned biography of John Quinn (1870-1924). Read more about him on the link to your right: ‘I want to tell you about an amazing man.’