In February, the seven-year old Abbey Theatre produces The Countess Cathleen, written 13 years before by Abbey founders W B Yeats, 46, and Lady Augusta Gregory, 59. They stole the idea of performing it from behind gauze from one of the other Abbey originators, Yeats’s old school friend ‘AE’ [George, Russell, 44], who had staged his own Deirdre play that way years before.

But Lady Gregory doesn’t arrive back in Ireland from her trip to America with the Abbey players until March. She puts the finishing touches on her Irish Folk-History Plays collection. The first series, ‘The Tragedies,’ is dedicated to former US President Theodore Roosevelt, 53, whom she befriended in the States. The second series, ‘The Tragic Comedies,’ is dedicated to Irish-American lawyer and art collector John Quinn, 42, whom she more than befriended. Augusta and John have been exchanging letters—but she has burned his. [Hers are now with his papers in the New York City Public Library.]

Augusta’s only child, Robert, 31, is looking forward to finally being in charge of Coole Park

The house at Coole Park

when his mother dies. The grand house passed to him on his father’s death 20 years before, and Robert has tolerated his mother’s writer-friends, particularly that Yeats fellow, hanging around and carving their initials on her ‘autograph tree.’ But on St. Patrick’s Day Augusta writes to a friend, ‘I am the principal of order in the house, and while I stay here I must keep things orderly.’ She has no intention of going anywhere.

As the RMS Titanic arrives in Queenstown [now Cobh], to pick up her last passengers before heading to New York City, British Liberal Prime Minister Herbert Asquith, 52, is introducing the Third Home Rule bill for Ireland in the House of Commons.

At the end of the year, Lady Gregory leaves for the States again, but this time to raise money for Dublin’s Municipal Gallery of Modern Art. Her nephew Hugh Lane, 36, founded it four years before to house his incredible contemporary art collection, hoping that Dublin Corporation would at least contribute to its operation. So far, no such luck.

And in the Dublin cafes, Dr. Oliver St. John Gogarty, 34, loves to read aloud the recently published Portrait of Mabel Dodge at the Villa Curonia by Gertrude Stein, 38. 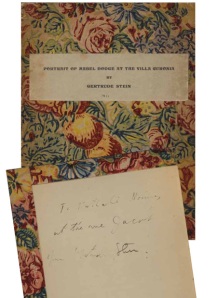