War has come to Bloomsbury.

The image of Lord Horatio Kitchener, 64, recruiting young men, appears for the first time, on the black and white cover of London Opinion magazine. 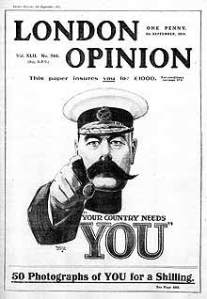 Bloomsbury friend, critic Desmond MacCarthy, 37, has signed up for the Red Cross Ambulance Service; art critic Clive Bell, turning 33, is trying to figure out how to join a non-combat unit such as the Army Service Corps; and painter Duncan Grant, 29, has entered the National Reserve.

Despite the hostilities in the rest of Europe, the Bloomsberries don’t stop moving. Duncan takes a studio in Fitzroy Square as well as rooms in nearby 46 Gordon Square, where Clive lives with his wife, painter Vanessa Bell, 35. Their friend John Maynard Keynes, 31, writing articles for The Economist magazine, moves to Great Ormond Street; and Vanessa’s sister, writer Virginia Woolf, 32, and her husband, Leonard, 33, are house hunting in London while still spending time at the sisters’ Sussex retreat, Asham.

On Tuesday, 9th September, and Sunday, 14th September, I will be leading a ‘Such Friends’ walking tour of some of these spots in Bloomsbury. Either day we’re meeting at 12:30 at the Mrs. Dalloway bench in Gordon Square, and after a stroll around the area, taking the Tube to see the excellent exhibit, Virginia Woolf: Art, Life & Vision, at the National Portrait Gallery [http://www.npg.org.uk/whatson/virginiawoolf/home.php]. Email me at kaydee@gypsyteacher.com if you would like to join us.

Near Paris, the French and British forces rout the Germans and, despite the half million casualties, the Allies score a victory that leads most to believe the troops will be home by Christmas. From her vantage point in Huily, journalist Mildred Aldrich, 60, watches the battle, taking detailed notes in both her journal and letters to her friend and fellow-American ex-patriate, Gertrude Stein, 40, in Paris.

One who is convinced that the German defeat will mean a short war is American artist and critic Walter Pach, 31, who is hoping to follow up the success of last year’s Armory Show with future exhibits of the latest contemporary art. He decides this would be a good time to go back to Europe and collect the works that have already been promised.

Also in New York, at Columbia University, George S Kaufman, 24, is looking for a new career by taking a playwriting course. But at Princeton University, F. Scott Fitzgerald, turning 18, can write proudly in his ledger, ‘Play accepted.’ His Fie! Fie! Fi-Fi! musical for the university’s Triangle Club gets good reviews and is a big hit.

The socialist magazine The Masses carries an article by former Mexican war correspondent John Reed, 26, which states of the current conflict in Europe:

“We, who are Socialists, must hope — we may even expect — that out of this horror of bloodshed and dire destruction will come far-reaching social changes — and a long step forward towards our goal of Peace among Men.

“But we must not be duped by this editorial buncombe about Liberalism going forth to Holy War against Tyranny.

Cover of The Masses, September 1914