This past summer, when I went to Pittsburgh, PA, for family events, I was able to bring along ‘Such Friends’ as well.

Although I grew up in the ‘burgh, and lived there most of my life, I had never visited the home of my fellow Pittsburgher, Gertrude Stein. She was born in what was then Allegheny, PA, and now the North Side. Or ‘Nof Side’ as some burghers might say.

It wasn’t hard to find, and on a nice hot day, I first took the Number 16 bus over from town for a visit to the wonderful Andy Warhol Museum [well worth the visit] and then the Number 17 for the few blocks to Western Avenue. A lovely now-gentrified area of the city.

Here’s the house, with its plaque:

Here’s a close up of the plaque: 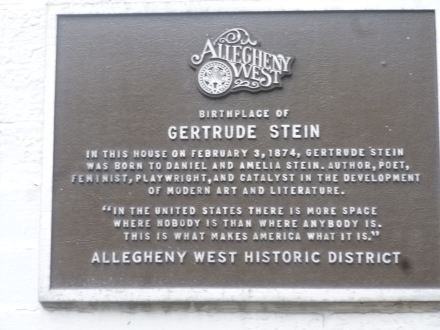 According to my notes, Daniel and Amelia moved here in 1862 and built two identical houses, one for them and one for his brother’s family. The Stein brothers owned a shop in downtown Pittsburgh, near Fourth and Wood Street, where I taught for years at Point Park University. Here’s the Stein house and the one next door: 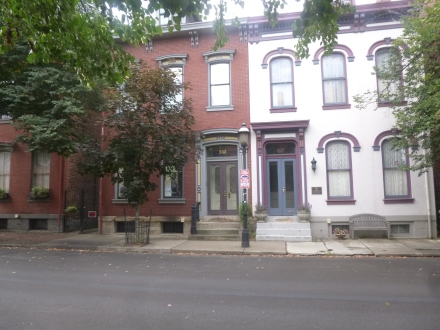 About six months after Gertrude was born, the youngest of their five children, the families had a falling out. Amelia stopped speaking to her sister-in-law and the brothers broke up the business. Gertrude and family upped stakes and moved to San Francisco.

Unlike my students, I am not good at taking a selfie. I tried, but luckily two young women on bikes stopped a few feet away and they generously agreed to help:

I am thrilled to report that the young ladies already knew who Gertrude was, probably because they live just a few doors down.

So, although her partner Alice B. Toklas said that Gertrude should have been born in San Francisco, she was definitely born in Pittsburgh and we are very proud.

The second half of the ‘Such Friends’ tour took me all the way to Shreveport, LA, to speak to the local chapter of the English Speaking Union [ESU]. I had given a talk during our Florida years to the Palm Beach chapter, and I’m now in the organization’s official directory of speakers. I was thrilled to get an email back in May from Mr. Delton Harrison inviting me to come to their first-ever summer meeting.

Their program committee was particularly interested in F. Scott Fitzgerald and Ernest Hemingway, and Mr. Harrison noticed that I had published a book about their Scribner’s editor, Maxwell Perkins, Manager as Muse. ‘You want to sell some books, don’t you?’ he said, encouragingly. ‘I like the way you think, Mr. Harrison,’ I told him.

So thanks to the Shreveport branch of the ESU, I was treated to two nights in their fair city. Over 100 people showed up at the Shreveport Club for dinner and drinks and me. Although I was without PowerPoint, I did have a grey fedora hat I had found in a Pittsburgh vintage shop, almost identical to the one Perkins wore all the time. No, really, all the time. If you have seen the recent movie, Genius, with Colin Firth portraying him, you may have thought that was odd. But it is indeed true.

Here is a photo of me and my new BFF, Delton Harrison. Thanks for the book plug, Delton:

I really enjoyed my short stay in Shreveport, and would be delighted to come back next year with some more ‘Such Friends.’

While I was on holiday in Pittsburgh, I also managed to dig in to the biography of John Quinn, published back in the late 1960s. I had read parts of it when I first discovered Quinn during my research, and was disappointed in how the author made this fascinating man with an amazing life seem so boring. I’m almost through the full 662 pages and my opinion hasn’t changed. So don’t bother buying it—wait for mine.

More about Quinn next time.

­­Here is the trailer for Genius: https://www.youtube.com/watch?v=89aQvamubxI