Poet, artist and playwright “AE” [George Russell, 46] is corresponding frequently with his Irish-American friend in New York, lawyer and art collector John Quinn, 43, about the incredible success of The Armory Show earlier in the year. Quinn had helped the newly-formed organizing group, The American Association of Painters and Sculptors [AAPS], untie the legal knots obstructing their importation of art from Europe, and then had bought up a bundle of incredible pieces during the weeks of the exhibit, including works by AE and others. 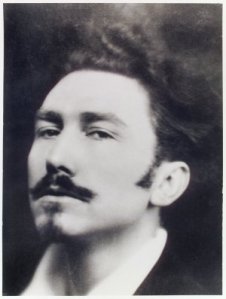 Virginia Woolf, 31, married one year to Leonard, 32, is finishing work on her first novel, to be published by her hated half-brother. Worried about Virginia’s health, Leonard is arranging to give up their apartment in London to move to the country home she has rented with her sister, painter Vanessa Bell, 34, Asham, also in East Sussex.

Vanessa is busy collaborating with their friends, painter Duncan Grant, 28, and art critic Roger Fry, 47, to decorate Fry’s home, Durbins, with large, brightly coloured figures in the hallway. Fry had experimented with woodcuts this year for his Christmas card.

Vanessa, Duncan and Roger have been working hard together in their Omega Workshops, but, by the end of the year, Vanessa has ended her affair with Roger and decided that Omega was taking her away from her painting. She is planning to withdraw from the project in the coming year. 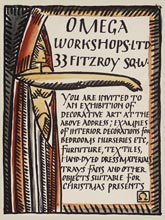 The big news in Paris is that the coveted Mona Lisa, stolen from the Louvre two years before, has been found in Italy and is being returned by the Italian government.

French art lovers are also fascinated by a cardboard construction, Guitar on a Table, by Spaniard Pablo Picasso, 32, which has appeared in the magazine Les Soirees de Paris.

Guitar on a Table by Pablo Picasso

But on the Left Bank, in 27 rue de Fleurus, where Picasso’s paintings hang alongside those of his rival Henri Matisse, about to turn 44, more important issues are being resolved. At the end of the year American ex-patriate writer and art collector Gertrude Stein, 39, is writing to friends that her brother, art expert Leo, 41, with whom she has lived in the flat for ten years, is planning to stay permanently in Italy. She and her partner, Alice B. Toklas, 36, also from San Francisco, have found “a place with very little balconies, third story in the Palais Royal and it’s going to be very nice.” She predicts that they will move by July.

Gertrude Stein and Alice B. Toklas at 27 rue de Fleurus, with the paintings

Gertrude’s friend, Mabel Dodge, 34, who had publicized Stein’s work during the Armory Show, has upped stakes from New York and is following her current lover, journalist Jack Reed, 26, to Mexico.

In Manhattan, budding writer Dorothy [“No, we’re not part of those Rothschilds] Rothschild, 20, living on her own, has decided not to attend her father’s funeral.

Home for the holidays in St. Paul, Minnesota, from his first year at Princeton University, another aspiring author, Francis Scott Fitzgerald, 17, is excited about writing lyrics for the University’s Triangle Club, and is keeping a detailed ledger of the stories he is working on.

The impact from the Armory Show is still being felt in the American art world. Cubist and postimpressionist paintings are being shown in Pittsburgh, and new galleries are popping up in Manhattan.

Quinn has decided that he will help the galleries with his inevitable purchases. He is also supporting Yeats’ father, painter Jack Yeats, 74, who had come to New York City for a visit and refused to give in to his family’s pleas to return to Ireland. He too had been impressed with the Armory Show, but writes to Quinn,

These gay souls will do good in unshackling painting. But, so far, they do not shake me in my plans, which are only to paint what I have seen happen.

“Such Friends” will be updating this blog at intervals throughout the coming year, to follow what the writers and their friends were doing one hundred years ago in the eventful year of 1914. Please send any contributions to me at kaydee@gypsyteacher.com or leave a comment below. Happy 2014!