[A Secret Sisterhood:  The Hidden Friendships of Austen, Bronte, Eliot and Woolf, by Emily Midorikawa and Emma Claire Sweeney [Aurum Press, 2017], is now out in paperback. Midorikawa and Sweeney run the blog, Something Rhymed, about female literary friendships, so it seemed this would be a good time to post a piece I wrote a few years ago about the famous duo, Gertrude Stein and Alice B. Toklas. Although they were much more than friends.]

If you want to read it yourself—and it’s a great, fun read—skip the ending of this blog which gives away Gertrude’s ending.

And besides, Gertrude could do anything she wanted. She was a genius. And Alice knew it.

Gertrude Stein was an American writer who spent almost her entire adult life living in Paris with her partner—Yes, they were gay!—Alice B. Toklas, also an American. They were so close that their joint biographer Diana Souhami [Gertrude and Alice, I. B. Tauris, 2009] says that from the day they met,

“They were together until Gertrude’s death. They never traveled without each other or entertained separately, or worked on independent projects.”

Like me, Gertrude was born in Pittsburgh, PA, although Alice said she should have been born in Oakland, CA. Her family moved west to the Bay area when Gertrude was only a baby. Dad made a bunch of money on the San Francisco trolley car system and then died. Her oldest brother Michael was such a good money manager that she and her other brother, Leo, were able to move to Paris right after the turn of the last century, live pretty well and collect art. They were known around town as the crazy Americans who wore sandals and bought weird paintings by unknown artists—Picasso, Braque, Matisse.

Leo and Gert are the first two on the left.

Alice also grew up in San Francisco, although the two did not meet until she came to visit friends in Paris in 1907, soon after the San Francisco earthquake. When she was introduced to Gertrude, she says she heard bells ring. She always heard bells ring when she met a genius, and Gertrude was her first genius. The second was Picasso, whom Gertrude introduced Alice to the next day.

After Alice moved in, Leo felt it was getting a bit crowded in their apartment at 27 rue de Fleurus on the Left Bank of Paris, so he moved out soon after.

Gertrude would sit up late at night at her writing table, under a Cezanne, trying to do in written portraits what Cezanne had done on canvas. Alice would get up early, type up the copy, note some changes in the margin, plan the meals and chores for the day, and dust the paintings. She said she learned all about the paintings by dusting them. In the evenings they would host salons and invite the artists to come see their paintings, hanging two deep on the walls. 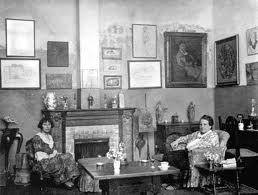 Gertrude and Alice at home with the paintings

During World War I Gert and Alice ordered a car from the States—they called her Godiva—and volunteered for the Red Cross ambulance service. They were both honored for their work by the French government after the war.

When the war ended in 1918, the GIs came back to the States with tales of the beauties of France and were slapped in the face with Prohibition. What better plan than to go right back to Paris where it was really cheap to live and you could drink? As a result, Americans flooded Paris in the 1920s. They sat around drinking in cafes, got into brawls in the street, and were the subject of nasty letters to the editors by the French. No wonder they hate us now.

Some of Gertrude’s avant-garde writings were being published back home in the States, so the American writers came to her house to listen to her expound on her theories of modernistic writing and eat Alice’s little cakes.

Novelists Ernest Hemingway and F. Scott Fitzgerald, the photographer/painter Man Ray, and the composer Virgil Thomson were among the creative people who would come to the Saturday night salons. Alice would answer the door, ask who had sent you, and, if she let you in, she might allow you to sit within the charmed circle around Gertrude. But your wife would be ushered into a separate corner of the large room to chat with Alice.

“I had often said that I would write, The wives of geniuses I have sat with,”

says Alice in the Autobiography.

appeared in one of Stein’s poems written in the early twenties, “Sacred Emily.” Ever on the lookout for ways to promote Stein’s brand, Alice took the phrase and arranged it in a circle to appear on Gertrude’s stationery, creating a logo for her work.

At the end of the 1920s, Alice got tired of cleaning up after the messy writers. Some of them, like Thomson, received Gertrude’s personal engraved cards with a note from Alice: 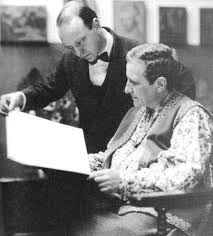 Gert kept badgering Alice to write the story of her life, because she had had the privilege of spending most of it with geniuses, but Alice was too busy taking care of Gertrude. So in 1932, at their summer home in the French countryside, in six weeks Gertrude sat down and wrote her most popular book.

Friends of hers in the States arranged to have it published by Harcourt Brace and, at the age of 58, Gertrude Stein was a huge hit. Her friends convinced her and Alice to come on a triumphant tour of the country they had both left behind almost 30 years before. When they arrived in New York, Gertrude’s name was up in lights in Times Square and the newspaper headlines read:

“Gerty Gerty Stein Stein Is Back Home Home Back.”

She introduced Alice as “my secretary” everywhere they went, although Alice ran all the details of the tour like the control freak she really was.

Back in Paris during World War II, they invited American soldiers to come to their salon.  They got to know a lot of writers and painters who turned out to not be as talented or famous as the ones who had come earlier.

After World War II, the US government sent Gert and Alice on a tour of American bases in Europe but towards the end, Gertrude became really ill. Rushed to the American Hospital in Paris, she was operated on but they found that her cancer was too far along.  Before she died, she turned to Alice and said,

“What is the answer?”

“In that case, what is the question?”

Alice was devastated but devoted the rest of her life to guarding Gertrude’s memory. In her old age Alice began doing some writing herself, mostly memoirs. Neither she nor Gertrude had ever been devout Jews, and Alice started practicing Catholicism with the rationale that she would be reunited with Gertrude in heaven. When she checked in for a retreat at a convent, at the age of 83 still chain-smoking Pall Malls, a copy of Vladimir Nabokov’s Lolita fell out of her suitcase.

Alice finally died at the ripe old age of ninety and is buried in Pere Lechaise cemetery.  She’s not anywhere near Jimi Hendrix; she’s right where she always was—directly behind Gertrude, for eternity.

What’s with those brownies?

The writers and artists all remembered Alice’s cooking fondly and in the 1950s convinced her to put together a cookbook of her own recipes as well as others from the people who came to the salons.

Painter Brian Gysin, who was just a passing acquaintance, sent along the recipe:

(which anyone could whip up on a rainy day)

Alice was in a hurry to get her manuscript to the publisher, and hadn’t tested any of the recipes, so she just slipped this one in.

Right before publication, someone at the American publishing house pointed out that hashish was a controlled substance, and Alice was mortified. It was taken out of the American edition, but her British publisher left it in. Some clever reviewers felt that this explained a lot about Gertrude’s writings.

There was a Peter Sellers movie in the 60s based on this myth—We Love You Alice B. Toklas. But neither Gert nor Alice ever needed drugs to alter their view of reality.

The ending of The Autobiography of Alice B. Toklas:

Gertrude Stein’s house, on the North Side of Pittsburgh, and me

To read more about American writers, Manager as Muse explores Scribner’s editor Maxwell Perkins’ work with F. Scott Fitzgerald, Ernest Hemingway and Thomas Wolfe and is available on Amazon in both print and Kindle versions.