In Paris, leaders of the allied countries from the Great War are meeting to carve up their defeated adversary, Germany. 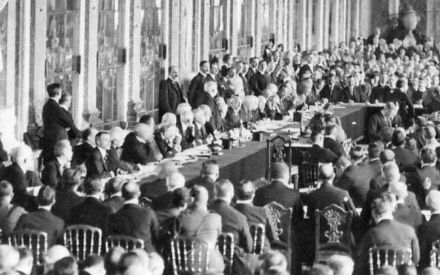 Paris Peace Conference in the Palace of Versailles

On the Left Bank, near the Luxembourg Gardens, Gertrude Stein, 45, and her partner, Alice B. Toklas, just turned 42, are settling back in to their home at 27 rue de Fleurus. They hope to re-start the Saturday evening salons they held to display and discuss the latest artworks they have been buying from their artist friends such as Pablo Picasso, 37, and Henri Matisse, 49. But it’s a different Paris than the one they left. As their friend, English art critic Clive Bell, 37, remarked,

They say that an awful lot of people were killed in the war but it seems to me that an extraordinarily large number of grown men and women have suddenly been born.’

Stein and Toklas with their paintings at 27 rue de Fleurus

American vicar’s daughter Sylvia Beach, 32, is finishing up her field work with the Red Cross and writing to her Paris friend about starting a bookstore. Her mother will advance her the money. Beach wants to sell the latest American books, but can’t decide whether to open in New York or London.

In another part of Paris, the US Army newspaper The Stars and Stripes, by American servicemen for American servicemen, is winding down. A big farewell banquet has been held, with Alexander Woollcott, 32, who will be going back to his job as New York Times drama critic, and Franklin Pierce Adams [FPA], 37, who will be returning to his must-read column, ‘The Conning Tower’ in the New York Tribune. Stars and Stripes editor Harold Ross, 26, is waiting in Marseilles to sail home to Manhattan, hoping to meet up again with the New York Times’ Jane Grant, just turning 27, whom he has been courting in Paris.

In St. Paul, Minnesota, on Summit Avenue, recently discharged serviceman F. Scott Fitzgerald, 22, is back home. He’s quit his job at the New York advertising agency Barron Collier, determined to finish his first novel, now called The Education of a Personage. Fitzgerald has received excellent advice, in letters and in person, from Scribner’s editor Maxwell Perkins, 34, and really wants to be published before the end of the year. He feels that will help him win back his ex-fiancee, Zelda Sayre, 18, of Montgomery, Alabama.

Scott Fitzgerald in the Army

In a cabin near Ephraim, Wisconsin, Sherwood Anderson, 42, who has spent most of his life working in advertising, is camping with his wife Tennessee, 45. Anderson has been pleasantly surprised by the success of his third novel, Winesburg, Ohio, published last month. But the pressure of writing it, and now starting another, has been too much, and he feels he has to get away.

Farther south, in Oak Park, Illinois, another would-be writer home from the war, Ernest Hemingway, 19, has also been dumped by his fiancée, Agnes von Karowsky, 27. She was his nurse when he was injured as a Red Cross ambulance driver in Italy, and he was convinced they would marry back in the States. Von Karowsky has told him that she is now engaged to someone else, but he is writing to her again anyway, ever hopeful. Mostly he’s looking forward to going fishing for the first time in two years.

Ernest Hemingway as an ambulance driver

In New York’s Greenwich Village, Margaret Anderson, 32, and Jane Heap, 36, publishers of The Little Review, are ignoring the censors and continuing to publish excerpts from Ulysses, the latest work by Irish writer James Joyce, 37, living in Zurich. They feel it is important literature, and are confident that their attorney, John Quinn, 48, will win their case in court.

Initial announcement of Ulysses in The Little Review

Parker has been invited to a luncheon at the nearby Algonquin Hotel. A press agent, to promote his client, new playwright Eugene O’Neill, 30, has asked the most important writers in Manhattan to lunch to welcome the Times drama critic, Woollcott, back from the war, and Parker has insisted that her new co-workers come along.

At lunch, Woollcott, who weighs only 195 for the last time in his life, has no interest in talking about anyone but himself and his exploits in the ‘theatre of war,’ of which he is inordinately proud.

To get back at him for monopolizing this meeting, and get more publicity, the PR flack invites other well-known critics from New York’s many publications to a big gathering at the Hotel. There are 12 dailies in Manhattan and five in Brooklyn. When 35 people show up, the hotel manager puts them at a big round table in the back of the dining room.

Tribune drama critic Heywood Broun, 30, and his wife, journalist Ruth Hale, 32, who had honeymooned by covering the war in France, are there. Tribune columnist FPA is invited as a personal friend of Woollcott.

In the next few weeks, their Stars and Stripes editor, Ross, joins the regular lunches. George S. Kaufman, 29, who works under Woollcott at the Times, comes and brings his playwriting partner Marc Connelly, 28.

When lunch is over, somebody says,

Why don’t we do this every day?’

And they do, for the next nine years.

The Algonquin Round Table by Al Hirschfeld

Manager as Muse explores Scribner’s editor Maxwell Perkins’ work with Fitzgerald, Hemingway and Thomas Wolfe and is available on Amazon in both print and Kindle versions.