…novice playwright George S Kaufman, born 29 years ago in Pittsburgh, PA, is thrilled to see a good review of his Broadway debut play, Some One in the House, in this month’s Vanity Fair magazine.

Unfortunately, the play closed last month. After only 32 performances.

Kaufman and his collaborator had written it as a melodrama, based on a magazine story. But their first venture into legitimate theatre had the misfortune to premier during the outbreak of the flu epidemic in New York, severely limiting the number of people going out for the evening. The authorities were advising people to stay away from large groups. So Kaufman had taken an ad,

Avoid the Crowds…See Some One in the House.’

And now, here is a good review. In Vanity Fair, no less…

Somehow, I have heard very little excitement about Some One in the House. It slipped unobtrusively into the Knickerbocker Theatre…All I knew about it was what I could glean from the billboards—that it was a “melodramatic comedy”—whatever that might be…And then I went to see the thing, they completely sold me on it. It wasn’t so much the melodramatic part that intrigued me…No, it’s the comedy that got me. It’s the best time I have had in, lo, these many weeks—ever since the current theatrical season opened, to be perfectly accurate. And the thing is done so perfectly, too….Lynn Fontanne [30], in a part that is a perfect dramatization of [New York columnist FPA’s, 36, character Dulcinea, does] the best bits of characterization that have been seen in these parts in many a day…You could go right down the cast that way and never find an error.’

Kaufman is encouraged. Vanity Fair is known for its usually acerbic reviews, by the only woman theatre critic in New York City, Dorothy Parker, 25. He decides he’d like to meet her some day and thank her. 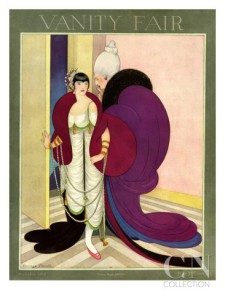