…New York City’s top newspaper and magazine writers have all been invited for lunch.

Earlier this month, press agent John Peter Toohey, 39, searching for a way to promote his young client, playwright Eugene O’Neill, 30, had set up a lunch with New York Times drama critic Alexander Woollcott, 32, just returned from France. At lunch, Alex, who weighed only 195 for the last time in his life, had no interest in talking about anyone but himself and his recent exploits in the “theatre of war,” of which he was inordinately proud.

To get back at Woollcott for monopolizing that meeting, and to get more publicity, Toohey had decided to invite all the other well-known critics from New York’s many publications to a big gathering at the hotel—all 12 dailies in Manhattan and five in Brooklyn.

Thirty-five have showed up! So hotel manager Frank Case, 49, has put them all at a big round table in the back of the dining room.

Dorothy Parker, 25, is here as the drama critic at Vanity Fair, wearing her best suit, and she had insisted that her new co-worker Robert Benchley, 29, come along. Sports writer Heywood Broun, 30, and his wife, Ruth Hale, 32, are here. Parker had met him, a vague acquaintance of her sister, one summer a few years before. The dean of New York columnists, FPA [Franklin Pierce Adams, 37] is here as a personal friend of Woollcott.

When lunch is over, Toohey–or somebody–says, “Why don’t we do this every day?”

And so they did. For the next nine years. 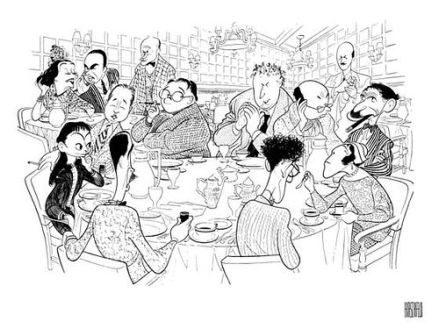 The Algonquin Round Table by Al Hirschfeld. Left to right at main table, Dorothy Parker, Robert Benchley, Alexander Woollcott, Heywood Broun, Marc Connelly, FPA. On the other side of the table, left to right, Robert Sherwood, George S Kaufman, and Edna Ferber.

Again this year, we’ll be telling stories about these groups of ‘such friends,’ during and after their times together.