I said I would buy the lunch myself.

As I recommend to all my visiting American friends, time your train trip so you can take along some lunch from M&S Simply Food, ubiquitous in train stations here. My preference is carrot sticks with reduced fat humous and salmon pasta salad. Yum.

So I stocked up and took off for London a few Saturdays ago to take part in my first ‘Dallowday,’ commemorating the day on which Virginia Woolf’s 1925 novel, Mrs. Dalloway, is set. The Irish all over the world have been celebrating ‘Bloomsday’ based on James Joyce’s Ulysses for over 50 years. Now it’s Virginia’s turn. 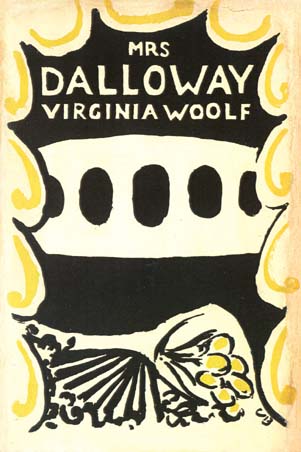 The Virginia Woolf Society of Great Britain has sponsored this day, which includes a walk through some of the novel’s settings, a discussion of the book, and a 1920s party at the Bloomsbury Waterstones. I signed up for the whole package.

On one of the hottest days of the year, I took the train from Birmingham New Street to Euston station, and then the Underground to the appointed meeting place, outside the Regent’s Park Tube.

Waiting for the Underground lift, literally a breath of fresh air came wafting through. The woman next to me, about my age, said, ‘Oh! That feels great. It’s so hot.’ I nodded in agreement.

Watching her walk up the stairs in front of me, I realized she was wearing a blue flower print dress and lovely straw hat. Aha. Another Dallowday participant, I surmised.

As we reached the street at the top, we both laughed. Standing just a few feet away was a gaggle of Dallowday fans. About 20 women ‘of a certain age’ in flowered dresses or skirts, straw hats—they all looked just like me! No trouble finding this group.

The walk was led by Jean Moorcroft Wilson, who obviously was a lot more familiar with the book and Virginia than I am, having read it years ago as part of my research. I actually have much more vivid memories of the Vanessa Redgrave film, which I’ve used in my presentations.

Jean was dressed in the full Dalloway, including a vintage dress and hat, complemented by darling low-heeled black shoes with straps. Very 1920s. She’d obviously done this many times before.

Jean pointed out that there is debate as to when Dallowday actually is. Whereas Joyce clearly set Ulysses on 16th June, 1904, the day of his first date with his eventual wife, Nora Barnacle, Woolf ‘s novel says ‘mid-June.’ However, by lining up events in the book with cricket games and the Ascot races, most scholars have settled on June 20th. But—this year, it’s Saturday, 17th June. So more of us can come.

The unusually warm weather—it’s actually been hot; Miami hot, not just England hot—didn’t slow us down a bit. After a stop in Regent’s Park, Jeanne walked us over to Fitzroy Square, where Virginia lived from 1907 until 1911 with her brother Adrian. Their sister Vanessa had married art critic Clive Bell and kicked the siblings out when the newlyweds took over the Gordon Square house, where we headed next.

My own Bloomsbury walk actually takes the reverse route, starting in Gordon Square and then over to Fitzroy Square.

Here’s me pointing out the house at #29 where Virginia lived:

At Waterstone’s, we sat in a circle, sipping refreshing flavoured ice water. Jean and Maggie Humm of the Woolf Society led us through an interesting discussion of the book. My research was on the relationships among the creative people in the Bloomsbury group, but wasn’t focused on their works—books, paintings, etc. This discussion brought new insights about the connections for me to incorporate into my future presentations.

And I learned that there is a website that maps all the walks of the characters in the book—Clarissa, Peter, Septimus and Rezia—showing how they interconnect.

For the 1920s party, I was planning to switch to Dorothy Parker mode, and so had tucked my red feather boa into my travel bag. But not many others were quite so dedicated to the flapper look, so I decided to stay in Bloomsbury garb.

Just this past week, I had another tax-deductible reason to go to London. Paula Maggio, better known to many of you as ‘Blogging Woolf’ was visiting from the States to attend the 27th Annual International Conference on Virginia Woolf. We made plans to meet up and she wanted to try the Dalloway Terrace at the Bloomsbury Hotel. We had a fabulous lunch of pasta and prosecco, treated ourselves to dessert, and took a peek at the 1920s-style Bloomsbury Club downstairs.

Dalloway Terrace at the Bloomsbury Hotel, photo by Paula Maggio

Paula had also heard about a life-size statue of Virginia at Kings College, where Woolf had studied classics in her early days. A bit of Googling and walking led us to the Woolf Building. A sign said it was locked due to increased security, but when the guard saw our noses pressed against the glass, he let us in.

There she was, encased behind plexiglass, big as life, holding a copy of A Room of One’s Own, in a wardrobe that was, as Paula said,

a closet of her own.’

Surrounded by large quotes from Virginia’s works, and photos of her, it makes a fitting entrance for the College’s School of English.

I would definitely add both of these places—Dalloway Terrace and the Kings College statue—to my Bloomsbury walk. Here’s a review of the restaurant by one of last year’s conference participants..

Heading back towards Euston station, Paula and I stopped by Woburn Walk, where the poet William Butler Yeats lived at the same time that Virginia and her siblings were moving into Gordon Square, just a few blocks away.

These intersections of time, place and characters are what interest me most. I can picture an aerial view of north London in 1907, as the Irish poet walks past the Stephens sisters, on their way over to enjoy a stroll through Regent’s Park.

Might make an interesting structure for a biography. Watch this space.

To read about American writers, Manager as Muse explores Scribner’s editor Maxwell Perkins’ work with F. Scott Fitzgerald, Ernest Hemingway and Thomas Wolfe and is available on Amazon in both print and Kindle versions.

Clive Bell, 25, is moving in with his new wife, Vanessa Stephen Bell, 27. Clive has been living with his family since graduating from Cambridge University. Vanessa has been living in the tacky neighbourhood of Bloomsbury since she moved her brothers and sister, Virginia, 25, out of Hyde Park Gate when their widowed father died, more than three years ago. Smartest thing she ever did. 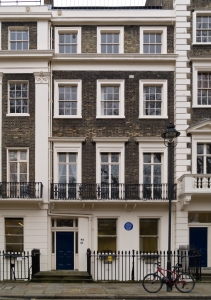 Now that Vanessa is a married Edwardian lady with a husband, it’s time for her siblings to move out.

Virginia and Adrian, 24, have found a suitable place, 29 Fitzroy Square. Virginia has heard that the family of the playwright George Bernard Shaw, 50, had lived there when they first emigrated from Dublin. That’s a good omen.

Moving a few blocks away won’t separate Virginia and Vanessa. The Bell marriage is a bigger threat. Virginia worries that the intimacy that she has shared with her sister will suffer.

But at least now she will have her own place, with Adrian. She can spend more time writing.

And their friends will still come on Thursday evenings, which Virginia always looks forward to. As she described these evenings later:

Watch the BBC Two drama Life in Squares about the Bloomsbury group, Mondays, 3rd and 10th August, at 9 pm, and let us know what you think.

…focusing on the life and loves of the Bloomsbury group.

We’d love to know what you think of it. We’ll be watching—with the cats, William Butler Yeats and Lady Augusta Gregory, both 12 years old—and tweeting our highly valued opinions @SuchFriends.

Parts of the three-part series were filmed at the gorgeous Charleston, the east Sussex home of Vanessa Bell, and parts in the Bloomsbury section of London, where many of them spent their early years together.

This month we’ll be posting about what the Bloomsbury group was doing during the important years of 1907-1915. And watch this space for information about upcoming walking tours of Gordon and Fitzroy squares you can enjoy with me—even if you’re not in London!

Post your comments about the BBC show here. We’d love to know what you think.

The cast of Life in Squares. Can you figure out who is who?

I Bring The Art To You