…writer John Millington Synge, 27, is looking forward to the next part of his trip.

He has just spent time living on the Aran Islands, getting to know the people, their stories, and their dialects.

Synge’s cottage on the Aran Islands

Now Synge will spend a few days in the west of Ireland with his new friend, the poet William Butler Yeats,  just turned 33, whom he met in Paris a few years ago. It was Yeats who had suggested that Synge ‘go west’ to explore his own family’s roots in Aran. Yeats felt Synge would be better off writing about them than the reviews of French literature he had been working on.

The two will stay at Coole Park, and their hostess there, Lady Augusta Gregory, 46, is coming to meet Synge at the train station. He has his manuscript about the Aran Islands tucked under his arm. 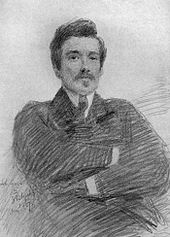 I Bring The Art To You