It appears that his loyal readers stuck with him after he got kicked off The Evening Mail last year—after a decade of building up one of the largest audiences in New York–when it was bought by a pro-German syndicate. The new owners managed to get rid of most of their Jewish writers, including one of FPA’s proteges, George S Kaufman, 25. So he’d brought Kaufman with him to the Trib.

Now FPA’s thinking of giving one of his other young writer friends a mention, Heywood Broun, 27. He has just moved from sports reporter to drama critic at the Trib. And has told FPA that he’s fallen madly in love with a Russian ballerina, Lydia Lopokova, 23, and is determined to marry her. FPA writes for tomorrow’s issue,

Heywood Broun, the critic, I hear hath become engaged to Mistress Lydia Lopokova, the pretty play actress and dancer. He did introduce her to me last night and she seemed a merry elf.’ 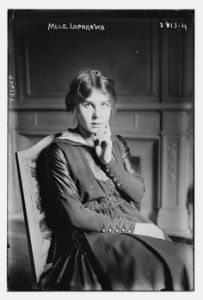