…Dorothy Parker, 25, is pleased with her new job as theatre critic for Vanity Fair. She’d started last year as a fill in when P. G. Wodehouse, 37, left, but now she has settled in with popular reviews such as ‘The Dramas That Gloom in the Spring”:

Parker had started with Conde Nast Publications back in 1915 after submitting a poem to Vanity Fair. The editor, Frank Crowninshield, then 43, had hired her—but for Vogue. She had spent the next four years writing captions such as,

From these foundations of the autumn wardrobe, one may learn that brevity is the soul of lingerie.”

The war ended last November, but her husband of almost two years, former Paine Webber stockbroker Eddie Pond Parker II, 26, has been assigned to the Rhineland, and won’t be back Stateside any time soon.

So for right now, Parker feels writing for Vanity Fair is fine. But she’s heard that Crownie has hired a managing editor, Robert Benchley, 29, some newspaperman from Boston. She’s not looking forward to sharing an office with him… 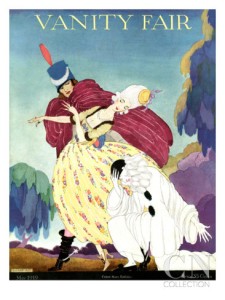