Having just arrived in Paris, Alice has been taken to rue Madame, near the Luxembourg Gardens, to visit with her fellow San Franciscans, the Stein family, who have been living there for the past few years.

The oldest, Michael, 42, and his wife, Sarah, 37, are art collectors who hold regular salons on Saturday nights to show off their paintings. Sarah had brought three Matisses home to California last year, after the earthquake, and Alice had been invited to see them there.

Michael’s brother, Leo, 35, also a serious art collector, comes by for dinner. He lives a few blocks away, with their sister, Gertrude, 33.

As Gertrude described the moment, years later in her Autobiography of Alice B. Toklas:

And there…I met Gertrude. I was impressed by the coral brooch she wore and by her voice. I may say that only three times in my life have I met a genius and each time a bell within me rang and I was not mistaken, and I may say that in each case it was before there was any general recognition of the quality of genius in them…In this way my new life began.’ 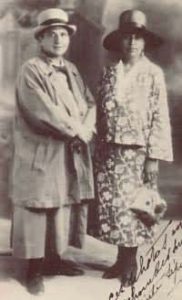 ‘From that day on they were together until Gertrude’s death…They never travelled without each other or entertained separately, or worked on independent projects”—Diana Souhami, Gertrude and Alice