…English painter Duncan Grant, 21, is living in Paris. When his aunt gave him £1000 for his birthday in January, he knew exactly what he wanted to do with it.

He has brought along his cousin and current lover, essayist Lytton Strachey, just turned 26, but the relationship is not going well. They’ve mostly spent time hanging out with English friends and relatives. Trying to make connections within the art world, Duncan is studying with painter Jacques-Emile Blanche, 45, and has visited the most talked-about art show, the Salons des Independents, but didn’t notice anything in particular.

American ex-patriate siblings, Leo, 33, and Gertrude Stein, 32, have also visited the exhibit. They were thrilled to hear about the scandal surrounding The Joy of Living [Bonheur de vivre] by their friend, Henri Matisse, 36. They started buying up his paintings last year and are planning to invite him to their salon at 27 rue de Fleurus on the Left Bank to introduce him to one of their other favourites, Pablo Picasso, 24.  She’s been sitting with him for her portrait. 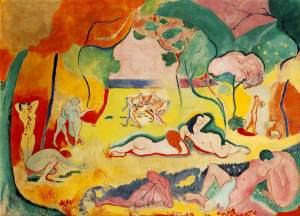