…in Ireland, Lady Augusta Gregory turns 62, the same age as I am now, until next week at least [Look more surprised…].

Her late husband, British Parliament MP Sir William Gregory, has been dead 22 years this month. She is still active in the running of her Abbey theatre, founded ten years ago with poet and playwright William Butler Yeats, 48. Their plays have been produced at theatres throughout Britain and the US. The one-month-old theatre school at the Carnegie Institute of Technology in Pittsburgh, the first in the world to grant drama degrees, is presenting some of Yeats’ one-acts this year, and Augusta’s Spreading the News next year.

She has income from rental property, but that has gone down while her taxes have gone up. Augusta’s only son, Robert, 33, is married and, under the law, he, and then his son, own Coole Park, where she has lived ever since her early marriage. Although it will always be associated with Lady Gregory, and she will live there for the rest of her life, Coole Park will never legally be hers.

Augusta and I both had our life-changing experiences in our 40s:  We found our life’s work—she established a theatre; I did my Ph.D. research into her ‘such friends.’ Augusta lost an Irish husband; I found one.

So today, on her birthday, I will lift a glass to toast her—along with My Irish Husband Tony and our two cats, Willie Yeats and Lady Augusta Gregory: 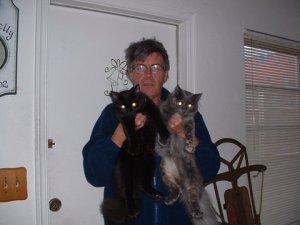